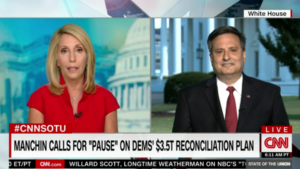 (CNN) – A group of economists urged congressional leadership to add a pathway to citizenship for undocumented immigrants to a budget reconciliation bill, arguing that it would bolster the US economy, according to a letter obtained by CNN.

The more than 50 economists, including former President Barack Obama’s top economic adviser Jason Furman, cited research and studies underscoring their analysis that immigration revisions would increase wages and productivity across the US economy, including creating jobs and lifting families out of poverty.

The letter adds to the growing chorus of immigrant advocates and Democratic lawmakers who want to prove that including immigration revisions in any budget reconciliation legislation would have budgetary effects and as a result should be included in the final version of the bill.

It’s a massive gamble for a party that has been promising to deliver on immigration restructuring for more than a decade, but key advocates argue that it is the last hope — potentially in this Congress — for anything to pass.

“A pathway to citizenship is a key component of a just, equitable, and robust recovery; and, as aforementioned, granting a pathway to citizenship for millions of aspiring Americans will bring expansive economic benefits to communities across the country –while having a significant impact on the federal budget — not only for the individuals directly affected, but for the larger systems — families, and the workforce — that they comprise,” the letter reads.

Other signatories include David Dyssegaard Kallick, director of the Immigration Research Initiative at the Fiscal Policy Institute, Eileen Appelbaum, co-director at the Center for Economic and Policy Research, and a number of professors at elite universities.

Budget reconciliation is how Democrats plan to pass the sweeping $3.5 trillion package that would expand the country’s social safety net, and they also are hoping to use it as a vehicle to provide a pathway to citizenship for millions of undocumented immigrants.