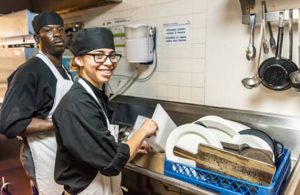 MIAMI — After finishing a particularly satisfying dinner at a Coral Gables restaurant with his wife, Pedro Martinez quietly slipped around to the back alley where the kitchen is.

“Whatever you’re making, I’ll give you a raise,” Mr. Martinez whispered when the back door swung open. An executive at 50 Eggs, a restaurant group based in Miami, he is always ready with a stack of business cards for occasions like this.

More immigrants have streamed into South Florida than to most American cities, and for decades, employers have relied on them to wash dishes, put up drywall and care for grandmothers. Still, there are not enough to fill Miami’s relentless boomtown demand for workers.

As unemployment rates nationwide have sunk to record lows, filching workers — from kitchens and construction sites, warehouses and Walmarts, truck cabs and nursing homes — has become routine. In cities like Miami that are magnets for immigrants, newcomers have filled some job openings, but employers across several industries and states insist that many more are needed for their businesses to function, let alone grow.

The economic impact is just one facet of an immigration debate that vibrates with political and moral import, challenging ideas about America’s identity and culture. But it is also one that can be examined more dispassionately by looking at the numbers.

And the numbers, most economists say, indicate that there is plenty of room. Immigrants make the country richer, they argue.

“Without immigration, we shrink as a nation,” said Douglas Holtz-Eakin, a former director of the Congressional Budget Office who has advised Republican presidential candidates and now leads the conservative American Action Forum.

That’s because growth is driven by two ingredients: the size of the work force and how efficiently those workers produce things. And both are creeping well behind the postwar average.

One reason is that Americans are having fewer babies. Birthrates fell last year to a three-decade low, ensuring that the next generation of native-born Americans will be smaller than the current one.