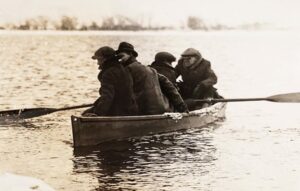 Nearly a century before President Donald Trump’s calls for a wall on the Mexican border, businesses, politicians, and immigrants on the U.S. border with Canada pushed certain Europeans toward illegal labor in America’s automobile industry. Dr. Bavery hopes readers will come to understand that this resulted in a system of policing and deportation that continues today.

An assistant professor of history and philosophy at Eastern Michigan University, Bavery has always had a passion for learning about the past. “Even when I was a child I was really interested in seeing old houses and understanding the past, which led me to pursue studying history at the advanced level. I think it’s individual stories that I find so interesting,” Bavery said.

Before beginning her journey at EMU, Bavery earned her Bachelor’s degree at Mount Holyoke College, in Massachusetts, and furthered her Ph.D at Northwestern University, in Illinois.

Aside from her early upbringing and academic background, she attributes a trip to the National Archives Building in Washington, D.C. as another root of inspiration for the book.

“I went to the National Archives and . . . noticed that there were all of these entries for illegal immigrants coming across the northern border, particularly [through] Detroit,” Bavery said. ” Detroit was the number one place for undocumented immigration in the 1920s, so I thought I’d pursue that further.”