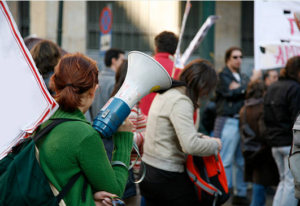 When East Aurora High School senior Sabrina Lusher, 18, signed up for an English class late last summer called “Survivor Literature,” there was no way she could have known what the curriculum would require of her Saturday morning.

“You can never know what the weather is going to be like, and despite the cold and rain, this is inspiring given what’s happened to all the various races of people and discrimination all over,” Lusher said. “When you come together it’s like the bigger picture and you help out in ways you never thought you could.”

More than 100 students, faculty and chaperones from the East Aurora High School community came together on a brutally chilly and rainy morning Saturday to walk nearly 23 miles from Aurora to Elgin in order to raise awareness and money for El Centro de Informacion, an immigration organization.

The walk was this year’s student-led project – a part of the curriculum in a course developed and taught at East Aurora High School by Shane Gillespie, who said he has been teaching the class for nine years.

“Over the years, we’ve read books about people that have survived various crises, from the holocaust and slavery and war to hurricanes and being forced to live in another country,” Gillespie said. “Students are asked to create a project each year and this time, we are doing this walk to raise awareness and money for this immigration organization.”

Participants gathered in a downtown Aurora parking lot near River and Vine streets before setting off. Gillespie said the route for the so-called “Walk for Lost Dreamers” would take participants along a river path 18 miles north, and then four miles of road walking before arriving at El Centro de Informacion.

“We have three support vans that are here if we have issues on the road,” he said. “Earlier, they were calling for rain and possible thunderstorms and lighting, in which case we would have just bussed kids over later in the afternoon. As far as fundraising goes, we are currently looking at just over $9,000 with another week to fund-raise, where we hope to get to $14,000.”