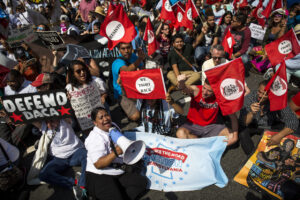 “I had so many [job] offers, but now that my application has been paused, I can’t even go to the interviews,” said a Dreamer. “I want a permanent solution, because we deserve it.”

For Ines Martinez, applying for DACA, or the Deferred Action for Childhood Arrivals program, represented a glimmer of hope during the coronavirus pandemic.

Seven months into her application process, Martinez was looking forward to joining the federal program that has allowed over 600,000 teens and young adults who lack legal status after having been brought to the U.S. as children — also referred to as Dreamers — to study and work without fear of deportation.

“I was very confident that I would be approved, because I’m a good candidate. I qualify for the program,” said Martinez, 19. Her confidence grew last month when Citizenship and Immigration Services asked her to come in to get her biometrics done, one of the last steps in the application process, in which authorities take applicants’ photos and fingerprints.

The only thing standing between Martinez, who lives in California, and getting a job was an official letter of approval from the immigration agency. She was eager to work to finish paying for her car and save enough money to transfer out of community college to pursue a degree in communications and international studies at a four-year university.

But she never got her DACA acceptance letter. Instead, a federal judge in Texas deemed the program illegal last Friday. While DACA renewals will continue to move forward, the ruling blocked new applications from being approved, leaving Martinez and thousands of other applicants hanging.

After putting in so much time, money and effort, “for this to happen twice already, it’s just devastating,” Martinez said. The first time was when she was initially blocked from applying after President Donald Trump temporarily ended DACA in 2017.