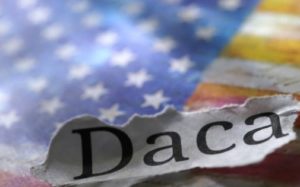 Jesus Contreras tore into his breakfast sandwich after getting off a 24-hour shift as a paramedic in the Houston area of Texas. He had got maybe 15 minutes’ sleep the night before.

Contreras, 26, is on the frontline of the US response to the coronavirus pandemic, a health crisis of epic proportions. But he is also one of an estimated 29,000 people in healthcare occupations who rely on an Obama-era immigration policy to shield them from deportation, according to a forthcoming analysis from the Center for American Progress (Cap).

Deferred Action for Childhood Arrivals, or Daca, allows undocumented “Dreamers” who came to the United States as kids to work legally and live without the constant looming threat of immigration enforcement officers knocking on their doors.

As the supreme court considers whether to greenlight his and hundreds of thousands of other potential deportations during this global pandemic, Contreras believes that getting rid of so many healthcare workers and other talented individuals when the country desperately needs them doesn’t make sense.

Many of these roughly 650,000 young people have grown up almost entirely in the US and are deeply rooted in their communities. Contreras, for example, moved to Texas when he was six years old and has lived in the Houston area for two decades.

Daca has allowed more than 3,000 registered nurses, almost 5,000 nursing and home health aides and about 4,000 medical assistants to enter their professions, among other healthcare fields, Cap found. Nearly 200 of the program’s beneficiaries are medical students, residents or physicians, according to the Association of American Medical Colleges (AAMC).

Donald Trump has been adamant about ending Daca, a goal that’s been stalled for years because of drawn-out court battles that have finally landed in front of the supreme court. Now, the country’s foremost justices are in the process of concluding whether the Trump administration can legally move forward with its plans to rescind the policy, or if that action is even judicially reviewable.

By Alexandra Villarreal for THE GUARDIAN
Read Full Article HERE