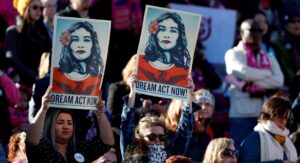 The tension that Kassandra Aleman, 26, has been accumulating in her neck and upper back since the Trump administration ended the DACA program three years ago “just dropped” after learning that Joe Biden had become president-elect on Saturday.

Aleman, a deputy training director for the Texas Democratic Party and a DACA recipient, helped organize volunteers in her state trusting that Biden would be able to deliver on his campaign promise once he is sworn in on Jan. 20.

“He said that on Day One, they’re going to reinstate DACA,” said Aleman, referring to the Obama-era program called Deferred Action for Childhood Arrivals, which allowed teens and young adults brought to the U.S. as children, but who lack legal immigration status, to apply for the chance to study and work without fear of deportation. “But Dreamers show up, so if promises were made to us and we’re not seeing that progress, we’ve never been afraid to go show up in someone’s office and say, ‘Hey, I thought you were on our side.’”

“Those are promises that would literally change my life,” said Mariana Castro, 26, a DACA recipient from Peru living in a mixed-status family in Florida.

The Trump administration began rejecting new DACA applications this summer about a month after the Supreme Court blocked the White House from fully ending the program, calling Trump’s efforts “arbitrary and capricious.” Existing applicants must reapply every year, instead of every two years, to remain in the program.

A 28-year-old DACA recipient from Houston started to write down his story as “a way for me to cope with everything that had been going on,” especially the mental health toll the uncertainty surrounding DACA’s fate took on him. He recently published his autobiography, “Until Death, Jail, or Deportation: Story of a Dreamer” under the pen name Hector Soliz.