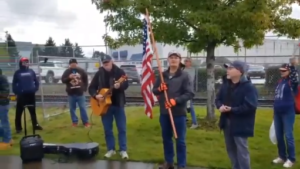 TACOMA, Wash. — Protesters were back at the ICE facility in Tacoma Saturday to show support for ICE agents.

A rally of more than a hundred comes just days after ICE’s regional director said their Immigration and Customs Enforcement agents are being threatened and harassed.

It was just a few months ago that anti-ice protesters were outside the facility in Tacoma, but now hundreds have made their way out here in support of immigration enforcement.

Some of the demonstrators are saying they’re tired of hearing so much negativity about the agency.

“I just can’t take it anymore,” Rochelle Higgy of Kent said. “I have to stand up and say no more.”

The people clad in America and MAGA are together to “stand with ICE.”

“We know the system’s not perfect. We want to come up with ideas to make it better through influence and not through violence,” said Rex Fergus, a member of the Tacoma chapter of Proud Boys.

According to Fergus, the main reason for this, aside from showing support for those that work for ICE, is to advocate for immigration reform that reflects their conservative ideals.

“Our whole point here is to give everyone this opportunity to be able to live this dream,” he said.

For some of the demonstrators, having immigrants come here legally is all that matters to them.