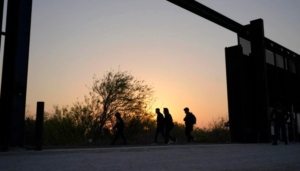 There once was a willingness in Congress and in the White House to tackle immigration reform.

But before George W. Bush and the Congress could act, immigration was seized as a political issue and it’s been trapped by politics for a couple of decades now.

Bush came to South Omaha in June of 2006 to make the case for immigration reform, with Sen. Chuck Hagel as a political ally on the issue.

“I’m going to continue traveling this country reminding the people that we have got an opportunity to put together a comprehensive package to reform the system to make it work, a system that will enforce our border, and a system that will reinforce our values,” Bush said in his Omaha speech.

“It’s an issue about our soul and our character,” he said.

“I want to thank Chuck Hagel for his leadership on this important issue,” Bush said.

And about “a society whose soul has been uplifted constantly by the fact that people have come to our country to realize a dream, the dream of working hard and improving their lot in life; the dream of putting food on the table, and at the same time hoping the child goes to college; the dream of owning their own businesses.”

Bryan Slone, president of the Nebraska Chamber of Commerce and Industry, has made the case that immigration reform and refugee resettlement are the policy answers that Nebraska needs to embrace now to confront the state’s growing workforce shortage.

A stunning 80,000 unfilled jobs, according to Slone’s best estimate, in a state that is battling to keep its young people here while trying to attract other young workers to come here.

The workforce challenge “limits us if we don’t address it,” he said.