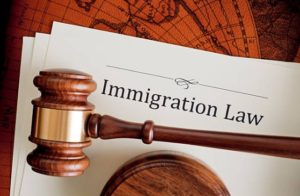 EOIR, as it’s known, is the arm of the Justice Department that oversees deportation proceedings — whether immigrants are allowed stay in the U.S. or whether they are turned back to their countries. Unlike independent trial courts, immigration court judges and employees work under Attorney General William Barr.

President Donald Trump has railed against the country’s immigration system, accusing asylum seekers who flee their home countries because of violence and poverty of trying to game the system. The court backlog existed long before Trump took office. But a crackdown on the Southwest border and illegal immigration plus a surge in asylum-seeking families from Central America have added more cases.

The Associated Press recently visited immigration courts in 11 different cities in late fall, observing scores of hearings that illustrated how the crushing caseloads and shifting policies are creating turmoil.

EOIR officials say it will take time for the changes they are implementing to sink in across a system where the average time is 130 days for cases where the immigrant is held in detention, and about 970 days — nearly three years — when the person is not detained. Plus, Justice Department officials ordered immigration judges to stop putting cases on hold indefinitely — a tool they used to manage a swelling docket — which brought hundreds of thousands of cases back.

McHenry and his staff are focusing on the data, technology, methodology in their agency. But they can’t control the entire massive immigration system.

“If we can get the backlog to decrease even a little bit that would be tremendous,” he said.

Among their biggest change is the recent creation of electronic filing system that is already being piloted in Houston, Aurora, Colorado and Philadelphia that will eventually replace mountains of paperwork stored in blue files used by most judges.

Under the new system, judges can generate orders, send information and read up on files. The system is meant for everyone who deals with immigration court – attorneys, plus multiple different agencies involved in immigration enforcement — and synthesizes all information so it can be accessed by all. It allows judges to check family histories, send orders and take notes. They can generate a court date with one click. By the end of 2020, 36 sites should be online.