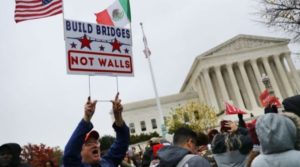 Last week, President Trump’s interference in the prosecution of Roger Stone thrust the Department of Justice once again onto center stage. Amid the debate about Stone’s case, a striking parallel is emerging in how the Justice Department has allowed politics to encroach not only in criminal cases but also in immigration cases handled by the immigration courts. Unchecked, this kind of political maneuvering threatens the Department’s legitimacy as an institution governed by the rule of law and justice.

Nationwide federal immigration court judges make thousands of life-altering decisions, including granting or denying individuals humanitarian protection or the opportunity to live and work in the United States. Unlike nearly all courts in America that enjoy considerable independence from the executive branch, however, the immigration courts are controlled by the Justice Department.

This gives the attorney general incredible power over the operations of the courts, the hiring and firing of judges, and their interpretations of the law. For the past three years, Attorneys General William Barr and his predecessor, Jeff Sessions, have used this authority to systematically exact politically driven outcomes.

Under their leadership, politics have infected hiring decisions. Last year, six judges with appallingly low grant rates for asylum claims were promoted to hear immigration appeals. Three of those judges approved asylum in less than 8 percent of cases, far lower than the national average of 31 percent.

In 2018, the Department removed a judge from a case because the attorney general disagreed with the judge’s rulings. This improper removal prompted the judges’ union to file a grievance in defense of the judge. In retaliation, the Department is attempting to break up the union.

At a level never seen before, the attorneys general have exercised a little-known power enabling them to rewrite asylum law and restrict immigration judges’ authority over fundamental court management functions, such as granting continuances or closing cases. The Department’s politically-appointed director also imposed quotas on judges to compel them to decide cases faster — failure to comply would make them vulnerable to firing. Expedience has supplanted fairness as the courts’ governing principle.

BY GREG CHEN FOR THE HILL
Read Full Article HERE