Home State & Local Laws Does Texas Spend More For Services To Undocumented Immigrants Than They Yield In Taxes? 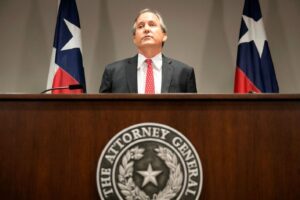 AUSTIN — As he celebrated an early-round win challenging one of just-inaugurated President Joe Biden’s dozen or more executive orders and policy changes on immigration earlier this year, Texas Attorney General Ken Paxton claimed to have made a big discovery: “Illegal aliens” are costing state taxpayers a bunch of money.

In his federal lawsuit challenging the Biden administration’s initial, 100-day halt to deportations of most noncitizens, “Attorney General Paxton uncovered hundreds of millions of dollars that Texas taxpayers involuntarily spent on illegal aliens every year,” Paxton said in a March 31 news release.

Texans are generous “but the cost of illegal immigration is an unconscionable burden on the taxpayers of our great state,” Paxton said, ticking off six categories of expenses.

Paxton’s depiction of undocumented immigrants as economic deadweights draws fierce disagreement from immigration advocates who brand his analysis artless and one-sided. In court last winter, his numbers were embraced in part – but partly rejected – by a sympathetic federal judge appointed by former President Donald Trump.

The episode highlighted how it’s been 15 years since Texas has made an official attempt to analyze how much undocumented immigrants add and subtract from state and local government finances.

In December 2006, one month after her bid as an independent candidate to unseat then-GOP Gov. Rick Perry fizzled, then-Comptroller Carole Keeton Strayhorn issued a special report, “Undocumented Immigrants in Texas: A Financial Analysis of the Impact to the State Budget and Economy.”

It estimated that deporting all 1.4 million unauthorized immigrants that were believed to live in Texas at the time would shrink gross state product by $17.7 billion or 2.1%. Strayhorn found undocumented immigrants produced for the state significantly more revenue than costs, a net positive of $425 million in fiscal 2005.