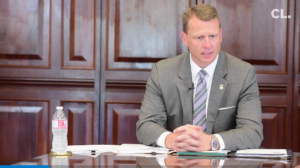 The war on illegal immigration reminds me a lot of the failed war on drugs.

For many years, supporters of the war on drugs thought incarceration would be a deterrent to drug use. Widespread raids netting arrests of users — partly in hopes of getting to pushers or dealers — were (and still are) one of the main tools in the fight. But it didn’t work in curbing drug use, and it still doesn’t.

One thing that helps: disrupting supply lines and going after dealers. Granted, someone usually steps in to fill the void, but the disruption is greater than any focus on users.

Similarly, with immigration, undocumented immigrant workers are not the problem with our broken immigration system; they are a result of the problem.

ICE raids don’t curb illegal immigration
Undocumented immigrants are coming to America illegally because the supply of jobs is here. No amount of rounding them up and sending them home is going to work — at least not for long. There have been and always will be plenty of other immigrants willing to come here illegally to fill those jobs, usually because whatever conditions they may find here — including the threat of arrest and deportation — are still better than the prospects they face at home.

If we want to really address the problem, then a path to citizenship is part of the answer. It won’t be without penalties, and it won’t be easy, but it will help create a legal workforce that is already contributing to our communities. It’s better than all the money we are spending on enforcement measures that we repeat ad nauseam.

But another key part of the answer is to provide for stronger laws aimed at businesses that employ undocumented workers. It’s clear employers are, at best, ignoring the obvious number of undocumented workers they employ. More likely, they are — in some way — helping to facilitate the continual supply of an undocumented immigrant workforce.

Don’t believe me? Just look at the court documents filed by U.S. attorney Mike Hurst to get search warrants for the companies. Those documents provide a rather clear picture of what is taking place.