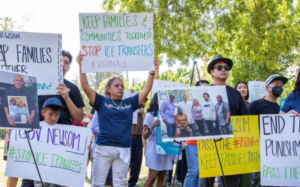 Hopes for abolishing one of U.S.’s most harmful immigration policies — deportation following incarceration in the criminal legal system, or “double punishment” — are withering as the Biden administration continues to snub immigration reform.

According to a recent Syracuse University report, 3,481 immigrants are currently in removal proceedings because of criminal charges, and many of them were seized upon their release from prison, before they could take even a single breath in freedom. And while that number is on track to be less than last year, advocates warn that without changing the underlying laws, rules and policies, what goes down this reporting period can go up in the next.

“The numbers are still astronomical in terms of the sheer number of people deported from their loved ones after a conviction or arrest,” Heidi Altman, director of policy for the National Immigrant Justice Center (NIJC), told Truthout. “There are many ways this could be done even without congressional action — through reversal of harmful Board of Immigration Appeals precedent, through rulemaking to allow greater access to bond hearings for those detained on the basis of criminal convictions, through processes to allow those unjustly deported to be returned, and/or through policy memos and training that requires officers to consider the racial bias inherent in the criminal legal system when making detention and deportation decisions. But none of that has happened.”

Instead of being returned to their families and communities for reentry to society, they are often held six months or more in private for-profit detention facilities, and then deported to countries where they may not have lived for decades, know no one, and do not speak the language. Besides the financial burden to taxpayers — $1.4 billion is budgeted in 2023 for 25,000 beds in Immigration and Customs Enforcement (ICE) detention — and the harms to the people being doubly deprived of their liberty, there is a social cost for punishing people based solely on where they were born.