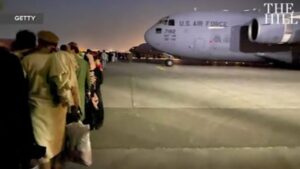 Homeland Security Secretary Alejandro Mayorkas is using his parole authority to allow some Afghan evacuees to enter the United States while they wait for their applications to be processed, a senior administration official told reporters on Tuesday.

The official said that, in some instances, Mayorkas is using his parole authority to allow Special Immigrant Visa (SIV) applicants who are in the pipeline but who haven’t completed the application process to potentially be given parole.

“The Secretary of Homeland Security is using his parole authority, including his ability to impose particular conditions of parole on those arriving, to ensure that those who are reaching here are doing so obviously with the appropriate legal status,” the official said.

Under the parole authority, the Department of Homeland Security (DHS) can allow individuals outside the U.S. to enter the country based on “humanitarian or significant public benefit reasons.”

The administration has vowed to provide a pathway to America for those who assisted the U.S. but don’t meet the two-year work requirement previously needed to get an SIV, allowing them to instead come to the U.S. through the lengthier refugee process.

“That parole authority is one that provides some flexibility for individuals for whom there is not a relevant legal status and inappropriate cases where people passed that security check I mentioned, that parole authority — again there is accompany conditions of parole where appropriate — is one of the things at play here as people enter the United States,” the official said.