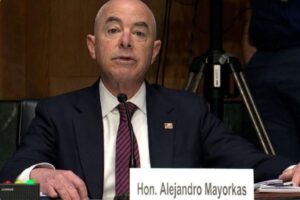 (CNN) – The Department of Homeland Security has stopped the practice of releasing migrants in the United States only with paperwork that tells them to report to an Immigration and Customs Enforcement office, Secretary Alejandro Mayorkas told senators Tuesday.

The Biden administration continues to expel tens of thousands of migrants arrested at the US-Mexico border under a Trump-era public health order. But some are released into the United States depending on capacity at border facilities and individual circumstances, typically with a “notice to appear,” which is a document that instructs people to appear before an immigration judge on a certain date and kicks off the deportation process.

But earlier this year, to move migrants faster out of overwhelmed facilities, US Border Patrol began releasing people encountered at the US-Mexico border without the “notice to appear.” Instead, agents provided migrants, many of them families, only with notices to report, which put the onus on migrants to initiate their own immigration process.

The practice drew wide condemnation from Republicans who argued the Biden administration didn’t know the whereabouts of migrants released into the US without the impetus of set court dates for them to reappear.

During a Senate panel hearing Tuesday, Mayorkas said that from January 1 to October 31, US Customs and Border Protection issued 94,581 notices to report, adding that the practice has been “discontinued.”

“We’ve discontinued the practice of issuing notices to report,” Mayorkas said. Migrants who are released going forward will likely receives notices to appear at immigration court, as has typically been done.

US immigration officials also recently began sending packets to migrants who underwent ad hoc processing. They are expected to include a “notice to appear” and additional information about ICE processing.

“During the ICE appointment, ICE will review the case with the noncitizen, take biometrics and photos, and establish any ongoing check-in requirements.