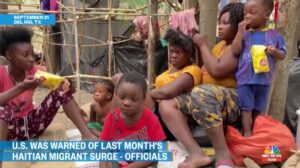 Two officials said progressives in the Biden administration blocked a plan to start deportations to Haiti before the migrant surge in Del Rio, Texas.

WASHINGTON — The U.S. knew in July that thousands of Haitians were heading to the U.S. border, but a failure to share intelligence and an internal debate over whether to increase deportations left immigration officials ill-equipped to handle the 28,000 who converged on a Texas bridge last month, three U.S. officials said.

The officials said the Department of Homeland Security has acknowledged the failures internally and has made them part of its discussions to be better prepared for any future surge.

Customs and Border Protection, Immigration and Customs Enforcement, or ICE, and DHS’ Office of Intelligence and Analysis all had information as far back as July that indicated that large groups of Haitians were making their way north from South and Central America to the U.S. border, the three officials said. But the intelligence was not shared widely enough within DHS and across agencies to indicate the size or speed of the group of migrants or that they would all arrive in one location.

In an interview Sept. 20 in Del Rio, Homeland Security Secretary Alejandro Mayorkas said, “I don’t think we expected the rapidity of the increase that occurred.”

Throughout the summer, two of the officials said, there were also disagreements within the Biden administration over whether it should increase deportations of Haitians already in the U.S. illegally.

The two officials said some argued that deportations — even of small numbers — would deter more people from coming, particularly Haitians living in South America.