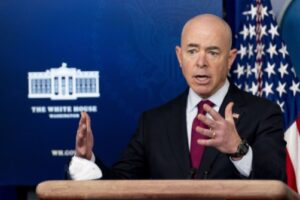 The multiagency effort is being led by DHS, with assistance from the FBI and State Department.

The Biden administration on Tuesday announced a stepped-up enforcement initiative targeting smuggling operations as part of its ongoing response to a record number of migrants arriving at the nation’s southern border.

Homeland Security Secretary Alejandro Mayorkas said that federal officials are targeting transnational criminal organizations and their members by going after their ability to travel, trade and access financial assets within the United States.

“We intend to disrupt every facet of the logistical network that these organizations use to succeed,” Mayorkas said on a call with reporters announcing the plan, dubbed “Operation Sentinel.”

The multiagency effort is being led by the Department of Homeland Security, with assistance from the FBI and State Department, among others.

“These organizations are complicit in sexual assault, human trafficking, and abandonment of young children, which we’ve routinely encountered,” said Troy Miller, who is leading Customs and Border Protection. “We will take everything we can from you.”

Officials said that the effort will be supported by other governments in the region to disrupt these networks and discourage smugglers. Mayorkas said that the operation announced Tuesday is broader than a similar one launched under former President Barack Obama, which the DHS secretary said primarily targeted smugglers’ money and not things such as travel documents and visas.