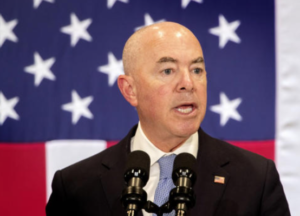 Dec. 5 (UPI) — The Department of Homeland Security announced special immigration protections for Haitian migrants already in the United States on Monday amid growing calls from advocates and Democrats for the Biden administration to aid those who have fled the crisis-ridden Caribbean nation.

Homeland Security Secretary Alejandro Mayorkas said they will be redesignating Temporary Protected Status, or TPS, for Haiti, offering work permits and protection from deportation to Haitians in the country as of Nov. 6.

He also announced that he would be extending TPS another 18 months through Aug. 3, 2024, for Haitians who were previously included in the program.

“After careful consideration, we determined that we must do what we can to support Haitian nationals in the United States until conditions in Haiti improve so they may safely return home,” said in a statement.

TPS is granted to nationals in the United States who have fled certain countries that they cannot return due to ongoing armed conflict, environmental disaster or other extreme though temporary conditions.

The United States first designated Haiti for TPS in January 2010 after it was hit by a 7.0-magnitude earthquake. Its designation has been extended several times until the Trump administration sought to terminate it effective July of 2019, which became entangled in lawsuits until the Biden administration redesignated the country in 2021.

With the Monday deadline for Mayorkas to continue the protections looming, immigration advocates and fellow Democrats have been calling on him to act before its too late.

Last month, the Haitian Bridge Alliance urged President Joe Biden to keep his campaign promise to “build a humane immigration system” while 16 House Democrats, led by Rep. Cori Bush, D-Mo., called on him in a letter on Wednesday to extend and redesignate Haiti for TPS.

“This is welcome news,” Bush tweeted Monday evening after the Department of Homeland Security announced its decision on Haiti’s status.