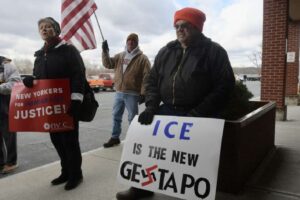 BATAVIA — After a New Jersey county ended contracts with U.S. Immigration and Customs Enforcement, 15 detained immigrants were transferred to the ICE detention center in Batavia.

The individuals were transferred 350 miles away to the Buffalo Federal Detention Facility on Nov. 12, ICE confirmed, which is currently holding 301 detained immigrants. The individuals and their advocates had been voicing concerns about such an outcome of the contract ending, as the transfer takes the immigrants even further away from their support systems of families and attorneys, many of whom live in the New York City and New Jersey area.

“ICE has complete discretion to release people, not to transfer people,” said Jon Moscow, co-chair of the Northern NJ Sanctuary Coalition. “Transferring people in the middle of the night, without any kind of real notice, without families and lawyers knowing, without people being able to take any kind of possessions with them, and being put on a bus and taken at least five-and-a-half hours away, is outrageous.”

The transfers came after Bergen County commissioners voted last month to end an agreement with ICE that allowed them to hold immigrant detainees at the county jail, which is located in Hackensack. The vote came after months of protests and hunger strikes from immigrants and advocates, making Bergen the last of three New Jersey counties that had been holding detained immigrants to exit the agreement.

“Having seen federal enforcement priorities change and large fluctuations in the number of detainees at the jail, it is no longer in the county’s best interest to continue housing ICE detainees,” Bergen County Sheriff Anthony Cureton said at the time of the vote.