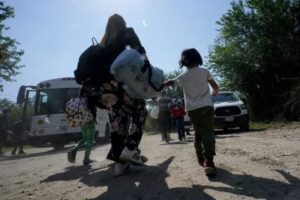 “These sites are unsafe, unsanitary, and damaging to children’s physical and mental wellbeing,” a senior director at the National Center for Youth Law said.

Attorneys representing immigrant children detained by the US asked a judge on Monday to release them from emergency shelters where they say they feel imprisoned, desperate, and hopeless.

In a 31-page filing, lawyers asked US District Judge Dolly Gee, who oversees a 1997 court settlement that sets the standard for the conditions the US can detain immigrant children, to order the Biden administration to expedite the release of these minors from the four emergency shelters it currently has children in.

The motion to enforce the Flores Settlement Agreement focuses on Fort Bliss, an army base near El Paso, and a former camp for oil workers in Pecos, Texas, where children reported being held in dirty conditions, served raw food, and inadequate access to medical care. As of July 21, 4,578 children were detained at the emergency intake sites.

Leecia Welch, senior director of legal advocacy and child welfare at the National Center for Youth Law, and one of the attorneys who filed Monday’s motion, said her organization interviewed more than 180 children at emergency intake sites.

“Each time we visit Fort Bliss and Pecos we speak to children who have been relegated to unacceptable conditions for months,” Welch said in a statement. “These sites are unsafe, unsanitary, and damaging to children’s physical and mental wellbeing. We hope our motion results in immediate improvements to alleviate children’s suffering at these sites.”

The Department of Health and Human Services started to open emergency shelters in March as the number of immigrant children who crossed the border without their parents quickly outpaced the number of beds available at shelters. The Biden administration scrambled to increase its shelter capacity in an effort to cut the number of children who were held for days at Border Patrol jail-like facilities.