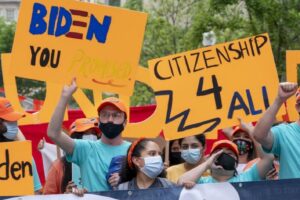 The Biden administration’s more lenient approach to illegal immigration is now showing up in the nation’s immigration courts, where over the final three months of the last fiscal year, judges issued deportation directives in less than a third of cases.

That’s down dramatically compared to 2019 and 2020, under the Trump administration, when 80% of cases resulted in either removal orders or grants of voluntary departure.

Department officials said the numbers are the result of the administration’s push to expand the reach of “prosecutorial discretion,” cutting thousands of migrants loose, even though judges did not rule in their favor. Instead, cooperation between Homeland Security’s lawyers and the migrants has resulted in record rates of cases being dismissed or terminated, which amounts to a tacit OK for those migrants to remain illegally in the country.

The more relaxed approach comes even as a border surge has meant about half a million migrants were caught and released by Homeland Security over the last year. Yet the immigration courts issued only about 40,000 or so deportation orders.

Experts said that mismatch is particularly troubling because it could help entice others to make the illegal journey, figuring they’ll take their chances with the immigration courts.

One source within the department, who has tracked developments but was not authorized to speak publicly about them, said it appeared the new team was “pushing to break the immigration court system.”

As part of the Justice Department’s Executive Office of Immigration Review (EOIR), the immigration courts are the usually unseen backbone of the nation’s immigration consequences delivery system. Immigrants without documentation who aren’t immediately ousted come to the courts for hearings, and the judges render decisions that give teeth to U.S. immigration law.

Changing patterns of illegal immigration over the last decade have put new strains on both ICE and EOIR.