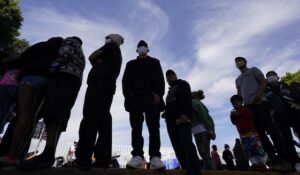 As Democrats search for a way to legalize illegal immigrants in their massive budget bill, a new analysis Tuesday says they could grant a tentative foothold to some 7.1 million immigrants through the use of “parole” powers.

Parole has been used to bring smaller groups of people into the country, including for tens of thousands of Afghan evacuees who were airlifted to the U.S. But Democrats are eyeing a mass parole that would cover a majority of immigrants who are in the country illegally.

The Center for American Progress, a liberal think tank, calculated that if parole were granted to anyone who made it into the U.S. before Jan. 1, 2011, it would cover 7.1 million immigrants.

Parole is not an automatic pathway to citizenship, so it falls short of the demands of immigrant-rights activists, but it is a tentative legal status that comes with the chance to get work permits and access to some taxpayer benefits, and often paves the way for future naturalization.

The analysts at CAP called it “a durable, long-term protection.”

“As senators pursue all avenues to grant relief to undocumented immigrants, parole is an important policy consideration that should pass parliamentary muster,” the analysts said.

Democrats on Capitol Hill have had two previous plans for legalization rejected by the Senate parliamentarian, who said a proposal that includes offering green cards — the key step toward citizenship — to undocumented immigrants is too big of a policy to shoehorn into the current budget debate.

That’s left Democrats searching for a “Plan C” option, and parole has surfaced as the top contender.

The CAP analysts said parole isn’t a permanent status and brings more limited benefits than green cards, so it shouldn’t trigger the same concerns as the first two Democratic proposals. And parole could be revoked by a future Congress, CAP argued.