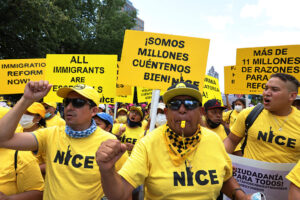 Democrats are awaiting a ruling on their bid to add immigration to their social spending bill — which they see as their last chance for progress this term.

With bipartisan immigration talks stalled, the White House and congressional Democrats are pushing to add a path to legal residency for 8 million immigrants to their sprawling social spending plan this fall. In order to steer that help for Dreamers, essential workers and those with Temporary Protected Status past a filibuster, though, the party has to win over the Senate parliamentarian, the chamber’s non-partisan rules arbiter.

In order to gain the parliamentarian’s approval and get immigration attached to the party-line spending plan, Democrats essentially need to demonstrate that their proposal would have a significant effect on federal spending, revenues or debt. Democrats assert that offering a pathway to legal status would make those included eligible for certain federal benefits — and thus impact the budget. They also claim precedent is on their side, highlighting a 2005 GOP-led bill that addressed immigration as part of the so-called budget reconciliation process, the same path they’re using this year to avoid the need for Republican votes.

Reaching a deal with Republicans on immigration is “at the best elusive and doesn’t seem to me that we can really get there,” said Sen. Bob Menendez (D-N.J.), who introduced President Joe Biden’s immigration reform bill earlier this year. “Reconciliation is our best chance: one because it’s must-pass, and two, because obviously we can do it with a majority vote.”

The Democratic plea to the parliamentarian — which could be decided as early as this week — is narrow and tries to use a longstanding talking point of immigration reform opponents against them: Extending legal status to new populations would cost the federal government billions.