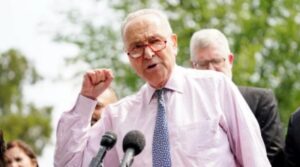 Senate Democrats will meet with the parliamentarian on Friday to make their pitch for including a pathway to citizenship for some undocumented immigrants in their $3.5 trillion spending package, two sources familiar with the plans confirmed to The Hill.

Senate Democrats haven’t unveiled their immigration language as they’ve continued to negotiate throughout a weeks-long summer break, but they want the sending plan to include a pathway to citizenship for at least “Dreamers,” immigrants with Temporary Protected Status (TPS) and long-term agricultural workers.

Democrats are using the budget reconciliation rules to pass the $3.5 trillion spending plan through the Senate without GOP votes, bypassing the 60-vote legislative filibuster. That places tight restrictions on what can be included and requires Senate Parliamentarian Elizabeth MacDonough, a former immigration lawyer, to weigh in on whether it complies with the chamber’s arcane rules.

One of the sources cautioned that Friday’s meeting was likely the beginning of the process with the parliamentarian on the immigration language that Democrats are hoping to get into the bill.

Democrats are able to revise their language if MacDonough rejects the initial language, the source added.

Republicans, meanwhile, are expected to use Friday’s meeting to make their case to the parliamentarian that Democrats’ plan to include a pathway to citizenship doesn’t comply with the budget rules that govern what can be included in Democrats’ sweeping spending package.

The Senate’s Byrd Rule details what can be included in the budget package and passed by a simple majority, meaning without needing GOP votes. One of its most well-known requirements is that any provision in the bill has to impact the federal government’s spending or revenues and that the impact can’t be “merely incidental” to its nonbudgetary intentions. The parliamentarian will determine if that requirement is met.
It wouldn’t be the first time MacDonough has ruled against priorities from both parties.

By Jordain Carney for THE HILL
Read Full Article HERE