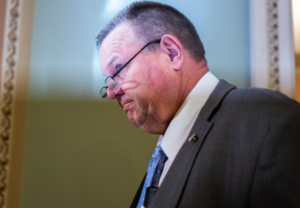 Senate Democrats stuck together in floor votes over the weekend to stop immigration-related amendments to their budget reconciliation bill, sidestepping Republican efforts to exploit divisions in the Democratic caucus ahead of the midterm elections.

Republicans failed to attract any Democratic votes on an amendment to extend border asylum restrictions under the public health directive Title 42, even though a similar proposal won support months ago from a handful of Democrats, including some facing tough reelection races.

That helped ensure the final package could win the support of progressive Democrats, who had sworn to vote it down if Republican “poison pill” immigration amendments were added during the hourslong “vote-a-rama” process over the weekend.

“In the wee hours of the night, GOP Senators offered anti-immigrant poison-pill amendments designed to kill this legislation—but Democrats refused to play along,” Sergio Gonzales, executive director of the advocacy group Immigration Hub, said in a news release.

Sen. James Lankford, R-Okla., offered the amendment that would provide $1 million for the Centers for Disease Control and Prevention to continue expelling asylum-seekers at the U.S.-Mexico border under Title 42 until 120 days after the end of the COVID-19 public health emergency.

Republicans had hoped the moderate Democrats who broke with their party in April would do so again on Lankford’s amendment, which needed a simple majority to be adopted. But the amendment was defeated in a 50-50 party-line vote.

Then, Democrats used a procedural maneuver to ensure their vulnerable members could safely cast a vote to keep the Title 42 directive in place, which could help them politically during a historically busy period at the U.S.-Mexico border.

Sen. Jon Tester, D-Mont., offered a similar amendment to extend Title 42 border restrictions. But, crucially, the amendment did not include any funding changes, which violated a Senate rule that requires provisions in reconciliation bills to be strictly budgetary in nature. Lankford’s amendment would have passed muster under the rules.