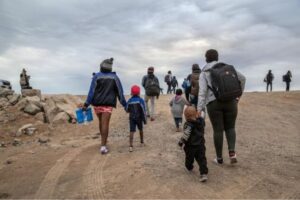 Democrats are trying to regroup on immigration changes in their sweeping tax and social spending bill, even as key proposals face enormous obstacles and the overall package teeters on collapse.

“We haven’t given up,” Sen. Catherine Cortez Masto (D-Nev.) said in an interview Wednesday. Democrats are actively discussing how to advance immigration measures, she said.

The House-passed provisions of the legislation (HR 5376) would offer parole status with temporary work authorization and protection from deportation for some undocumented immigrants, along with addressing chronic backlogs in the visa system.

In a December one-two punch, the Senate parliamentarian concluded the parole plan violated the chamber’s rules for the budget reconciliation process Democrats are using to pursue their agenda without Republican support. Sen. Joe Manchin (D-W.Va.) dealt a bigger blow to the package days later when he announced he wouldn’t support the House bill.

Immigrant Haitian families walk through a gap in the Mexico border wall to Yuma, Ariz., on Dec. 10, 2021 after making the journey from Brazil and Chile. Yuma saw a surge of migrant crossings last month.

Senate Majority Leader Chuck Schumer (D-N.Y.) has vowed to push forward with a vote, and some lawmakers have floated options for a slimmer package to appease Manchin, whose vote is crucial. Advocates are working to ensure immigration measures are included in any future version.

If a deal comes together, Democrats are poised to at least vote on disregarding the parliamentarian’s advice and plowing ahead on rejected immigration provisions, according to a person familiar with the discussions.

Schumer and other key Democrats signaled support for that approach before Manchin’s announcement last month. Many immigrants’ rights advocates are ramping up pressure for senators to use a procedural maneuver to ignore the parliamentarian and revive earlier provisions that would provide a path to citizenship.