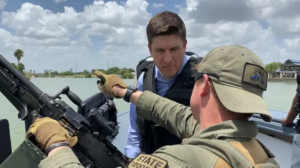 A congressional trip to southern Texas Friday led to committee members trading partisan broadsides over immigration, hearing decorum and whether members are taking various problems near the southern border seriously.

The House Select Committee on Economic Disparity and Fairness in Growth was in McAllen, Texas, for a hearing on living conditions and infrastructure for residents of the area. It was led by Chairman Rep. Jim Himes, D-Conn., and Rep. Vicente Gonzalez, D-Texas, in whose district the hearing took place.

During the trip, members visited poor “colonia” settlements near the border, which often lack running water and sewage, and sat down to hear from residents of the neighborhoods.

Separate from the official part of the committee trip, Republicans visited the border itself to witnessed what they said is a major crisis that is Democrats’ fault.

“It is lawlessness and the chaos is burning out of control,” Rep. Jodey Arrington, R-Texas, said after a tour of the Rio Grande with Texas Department of Public Safety troopers. Committee Ranking Member Rep. Bryan Steil, R-Wisc., and Reps. Byron Donalds, R-Fla., and Kat Cammack, R-Fla., also participated in the tour.

Officers showed the members the heavy Texas state and federal law enforcement presence along the river, as well as a section of privately constructed border wall between the river and farmers’ fields on the U.S. side.

The boat also stopped in several locations to tour landing spots for migrants who come across the Rio Grande in rafts. The brush along the riverbank in those spots was heavily trodden down, signaling large amounts of traffic had passed through. Deflated rafts, empty water bottles, personal items and even makeshift rest shelters were also visible on the banks.

“We have Democrat members of Congress who were with us four hours ago who are not with us right now,” Donalds said.