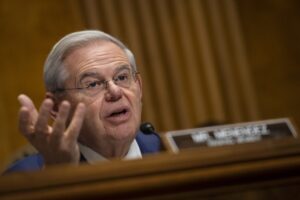 It’s unclear what policy shifts will pass muster under Senate rules that would allow the party’s senators to approve the measure without Republican support.

WASHINGTON — Democrats are making an ambitious attempt to muscle through changes in the immigration system in a sprawling $3.5 trillion economic package.

Sen. Bob Menendez, D-N.J., the lead author of a sweeping immigration bill that reflects President Joe Biden’s vision, said Thursday that Democrats are exploring immigration changes worth $120 billion in the budget reconciliation measure, which can pass without Republican support.

Menendez said Democrats will seek to allow a path to legalization and green cards for certain “Dreamers,” farmworkers, essential workers and people on Temporary Protected Status.

“That’s not everything that my U.S. Citizenship Act would do, but it would be a very big down payment,” he said, adding that the goal is “to be as expansive as we can on immigration reform.”

Democrats face serious obstacles. All 50 senators who vote with the Democrats, along with a majority of the House, would have to agree to any policy changes for them to become law.

And Menendez conceded that it is unclear what measures the Senate parliamentarian would allow under the “Byrd rule,” which restricts the reconciliation process to changes in spending and taxes.

“How far do we want to go? We want to go as far as we can, assuming the parliamentarian allows it to happen,” Menendez said. “It has tremendous budget effects. It will provide revenue to the federal Treasury because of the fees and taxes people will pay. It will also have some costs.”

Others say immigration changes would be merely “incidental” to the budget process and therefore invalid under the rules of the process, which can bypass a filibuster.

“Reconciliation is designed as a budget thing and not necessarily a policy issue. So I think they’re going to have a very difficult time getting immigration in,” said Sen. Mike Rounds, R-S.D., who worked with Democrats on compromise immigration legislation in 2018.