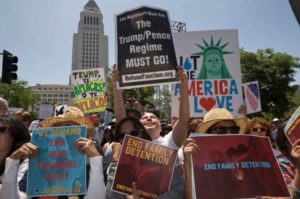 Democratic candidates largely avoided engaging President Trump as he fanned public fears over a migrant caravan ahead of the midterm elections. But they also avoided confronting a key question for themselves: What kind of immigration system does the party stand for in the Trump era?

Some Democrats are pushing the idea of a new comprehensive immigration plan akin to bipartisan legislation that foundered five years ago. Others want to focus attention on the narrower goal of granting legal status to undocumented immigrants known as “dreamers,” who have lived in the country illegally since they were children and whose cause is broadly popular with the public.

But the boldest, and most controversial, Democratic rebuttal to Trump’s bumper-sticker sloganeering has come from progressive newcomers, most prominently Rep.-elect Alexandria Ocasio-Cortez, who swept to victory in New York behind calls to “abolish ICE” — the Immigration and Customs Enforcement agency, with 20,000 employees — over perceived abuses.

Some party leaders, including Sens. Elizabeth Warren (D-Mass.) and Kirsten Gillibrand (D-N.Y.), both considered potential 2020 presidential contenders, echoed that sentiment. But other prominent Democrats urged restraint, fearful of overreaching and spurring a backlash among more moderate voters, while Trump and other Republicans have seized on the idea in contending that Democrats favor “open borders.” Since Election Day, the progressive group has backed off the message.

Trump is likely to further roil the debate with his comments Saturday that this “would be a very good time to do a shutdown” of the government over the $5 billion he has demanded to fund his wall along the U.S.-Mexico border.

Democrats oppose the project and are not likely to agree to further wall funding in a government spending bill that must pass by Dec. 7 or trigger a partial government shutdown.

The wall fight could further highlight Democratic divisions on immigration. Last week, at a Senate committee hearing over Trump’s nomination of Ronald Vitiello as the new ICE director, Sen. Kamala D. Harris (D-Calif.) appeared to link the tactics employed by the Ku Klux Klan to the perceptions in some immigrant communities about “fear and intimidation” from ICE agents.