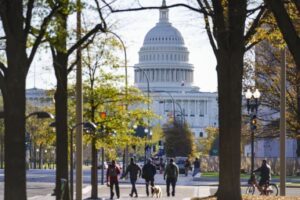 WASHINGTON — House Democrats last month passed legislation that would offer protection from deportation for millions of immigrants for the first time in more than 35 years.

The immigration provisions — part of a $1.85-trillion social spending bill — probably represent Democrats’ last chance to achieve reforms to the nation’s immigration system before the 2022 midterm election. After that, if Republicans gain the majority in Congress, the possibility of winning any protections for immigrants would probably drop exponentially.

The measures now face an uphill battle in the Senate, which is expected to take up the legislation this month, and they could be stripped by the Senate parliamentarian well before that. Adding to the challenges there, immigrant advocates are at odds over provisions that would provide work permits to nearly 7 million immigrants living in the country without authorization. The protections would provide temporary respite from deportation but not a path to citizenship.

Some immigrants and their allies say the provisions are a desperately needed start, while others call them unacceptable, a divide that echoes a long debate over whether immigrants should conform to some immediate protection from deportation or hold out for permanent legal status.

The bill, which Democrats call “Build Back Better,” would also help immigrants living in the country legally but who are stuck in a years-long green card backlog, and it would beef up the cash-strapped federal Citizenship and Immigration Services agency.

Gabriel Valladolid, 47, said essential workers like him deserved a pathway to citizenship. But Valladolid, who works tomato fields in San Joaquin, Calif., longs to visit the two adult children in Mexico he hasn’t seen in 17 years.

He recalled when California lawmakers extended driver’s licenses to undocumented residents and some people complained because they couldn’t be used for air travel and were marked differently than regular licenses.