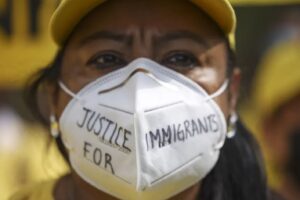 Immigration provisions in Democrats’ budget reconciliation bill are likely on the chopping block.

The House may soon vote on Democrats’ $1.75 trillion budget reconciliation bill, with provisions to shield undocumented immigrants living in the US from deportation and relieve long visa backlogs.

But like many of the immigration proposals from the last few decades, these new, critical immigration fixes appear unlikely to actually become law. So why is this latest round of immigration reform proposals probably doomed? Two reasons: because of the structure of the Senate and because, on immigration, identity issues have replaced policy.

The American public has never been more supportive of immigration, with a third saying that it should be increased. In 1986, the last time Congress passed a major immigration reform bill, only 7 percent of Americans supported increasing immigration levels. And narrower reforms, such as expanded protections for undocumented people already in the US, have been found to have majority support.

But despite that growth in public support, the House and Senate haven’t been able to reach bipartisan agreement on immigration in decades. Though comprehensive immigration reform bills passed one chamber in 2007 and 2013, they ultimately failed in the other. And while the House has passed bipartisan legislation addressing narrower immigration issues over the last couple of years, those bills have yet to gain traction in the Senate.

This has led to a Democratic insistence on trying to use the budget reconciliation process to address immigration, which would bypass the need for Republican support. So far, those efforts have failed. But Democrats haven’t given up on it yet.

As part of their social and climate spending package, known as the Build Back Better Act (BBB), Democrats initially sought to create a path to citizenship for millions of undocumented immigrants living in the US.