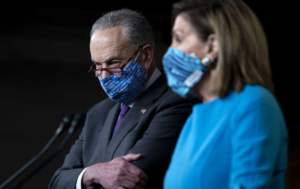 Some Democratic lawmakers facing tough reelection races this fall have appealed to President Biden to reconsider his plan to roll back pandemic-era border restrictions next month, which they fear will lead to a surge of migrants crossing the southern border.

Now Democrats who’ve been pressing the administration for months to scrap the restrictions — known as Title 42 —are pushing back.

Escobar, who represents a border district, said she was concerned about the “unsustainable” number of migrants seeking to cross the border. But leaving Title 42 in place for longer, she said, isn’t the answer.

“We’ve tried the Republican strategy,” Escobar told the Early. “The Republican strategy has been to build walls and harden the border. That hasn’t worked. And if you look at Title 42 over the last two-and-a-half years that it’s been in place, it has not slowed migration, deterred it, or eliminated it. So we have to do something different.”

The Trump administration imposed Title 42 at the start of the pandemic, giving border officials the authority to turn away migrants to slow the spread of coronavirus. Centers for Disease Control and Prevention Director Rochelle Walensky announced earlier this month that the agency would abandon the policy, effective May 23. Her decision is being challenged in court by Republican attorneys general, and a federal judge in Louisiana moved on Wednesday to block the Biden administration’s plan temporarily.

Republicans have seized on the issue to bolster their argument that Biden is overseeing a lawless border. But the decision to end Title 42 has also split Democrats worried about losing control of the House and the Senate in what’s expected to be a tough election year.