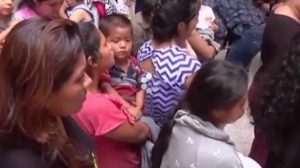 During his Thursday confirmation hearing to become the director of the agency he has lead on an acting basis since June, Vitiello faced pointed questions and scathing criticism from Democratic members of the U.S Senate Committee on Homeland Security and Governmental Affairs. Some of the fiercest questioning came from California Sen. Kamala Harris, a former prosecutor, who asked the ICE chief if he recognized how his agency is perceived in many immigrant communities.

“Are you aware that there’s a perception that ICE is administering its power in a way that is causing fear and intimidation — particularly among immigrants and specifically among immigrants coming from Mexico and Central America?” Sen. Harris asked, after a heated exchange with Vitiello over an alleged comment he made on Twitter comparing the Democratic Party to the Ku Klux Klan.

Vitiello’s admitted that his tweet “was wrong to do” because it included “offensive words.” Pressed by Harris, the Acting ICE Director also stressed that he saw no parallels between the perception of the work undertaken by his agency’s officers and the “fear and force” he said the Ku Klux Klan employed to “change the political environment.”

The junior senator from California also pressed Vitiello on an agency directive from December of last year that effectively ended the practice of auto-releasing pregnant women from ICE detention. Asked for the number of pregnant women in ICE custody, including those in their final trimester of pregnancy, Vitiello said he did not have statistics with him, but that the number is “very small.” He added that detention of women in their third trimester is “rare.”

Sen. Harris asked ICE’s Acting Director if the agency had commissioned an assessment of the treatment of pregnant women under its custody. “A specific assessment, I’m not aware of,” Vitiello responded.