Home Resources Democratic Candidates Need to Get Real on Immigration 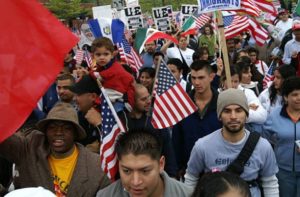 Nearly every Democratic presidential candidate has fulsomely blasted President Donald Trump’s policies toward asylum-seekers. They’ve also pledged to provide a path to citizenship for the Dreamers — the 700,000 or so undocumented youths currently protected from deportation — and the larger undocumented population of 11 million.

What most of them haven’t done, however, is explain how they plan to fix an immigration system badly in need of reform. As the 2020 campaign intensifies, this should become an urgent priority.

Trump’s cruel and counterproductive treatment of asylum-seekers indeed deserves condemnation — but the 25,000 or so individuals granted asylum each year for the past two decades represent only about 2.5% of all green cards awarded annually. Likewise, any resolution for the undocumented must keep faith with the almost 4 million legal would-be immigrants who have been waiting their turn, many for longer than a decade.

Voters need reminding that the U.S.’s economic future depends on sustaining its vibrancy as a nation of immigrants. Consider that almost half of today’s Fortune 500 companies were established by immigrants or their children. These founders have brought entrepreneurial energy and, in the case of technology companies, a greater propensity than the native-born to invest in innovation and research and development. Over the past two decades, immigrants have also generated nearly half of the robust labor-force growth that has set the U.S. apart from the world’s major economies.

Yet, the U.S. workforce is still growing older. Last year, the country’s rate of population growth was at its lowest since 1937. That doesn’t bode well for economic dynamism or fiscal health. Meanwhile, other developed countries are scooping up highly skilled workers deterred from coming to the U.S. by its increasingly restrictive and cumbersome rules. The Trump administration hasn’t helped by clamping down on almost all forms of immigrant and nonimmigrant visas, harming a swath of industries including tourism and farming and high-tech.

By Editorial Board for BLOOMBERG OPINION
Read Full Article HERE