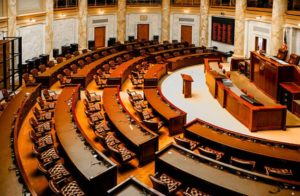 Lujan Grisham rode with House Minority Whip Steny Hoyer (D-Md.), who was invited to the 11:30 a.m. meeting, with hopes that the White House wouldn’t be able to deny her face-to-face, according to two sources with knowledge of the plan. Her idea worked, as she was later caught by TV cameras sitting at the oblong table with roughly two dozen other lawmakers for the lengthy confab.

The New Mexico Democrat was one of a handful of notable names left off the White House’s invitation list, leading top Democrats to downplay the huddle as little more than a Republican-led photo op.

Lujan Grisham, who is running for governor in 2018, joked ahead of the meeting that given her petite size — she is one of the shortest members of Congress — it should be easy to sneak her onto the White House grounds.

Republicans and Democrats remain at a standstill over a legislative fix for Dreamers, an impasse that threatens to imperil broader budget talks ahead of a Jan. 19 deadline to fund the government. It’s unclear if Lujan Grisham spoke during the extraordinary meeting, where Trump and lawmakers discussed everything from immigration to Oprah to earmarks, all in front of reporters.

At one point, Trump even suggested he was open to a broader revamp of the immigration system, saying he would “take the heat” for lawmakers if they pursued comprehensive immigration reform after action on Dreamers.

“I think comprehensive will be phase two,” Trump said.

Nearly two dozen Senate and House members were invited to Tuesday’s meeting, but the White House did not include several House Democrats who have been closely involved in the immigration negotiations, including Lujan Grisham and other top members of the CHC.

House Minority Leader Nancy Pelosi (D-Calif.) pushed to have Lujan Grisham added to the list Monday but the White House said no, citing “space issues” Pelosi said, even as the administration continued to extend the invite to other lawmakers.