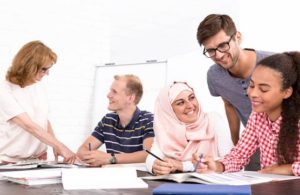 June is Immigrant Heritage Month as well as Refugee Awareness Month. In solidarity and support, we will run a series of artist profiles and features this month about the experiences of undocumented artists, from a first-of-its-kind fellowship for undocumented artists to LGBTQ artists whose experiences coming out as queer gave them the language to then also “come out” as undocumented. Read the rest of this series here.

Elnaz Javani had already been waiting five years for her visa interview when the U.S. Immigration and Customs Enforcement announced last May that they were freezing visa interviews.

During this time—six years total now—she hasn’t been able to leave the country, see her family (who are all still in Iran), or even have a full-time job, instead relying on the “gig economy” for unstable, impermanent, often low-paying work to eke out a living.

“It was too much stress and pressure. That was the moment that I realized the system is making me this vulnerable and feeling nothing inside. It made me feel like I am nothing, that I don’t have any power in this system. People don’t understand that because they’re not in it themselves. ”

Without a visa or other permanent resident documents, Javani is held in interminable limbo. She can’t get health insurance. She has to work harder as a part-time “gig” worker because she can’t get a more permanent, stable job, and she has to balance that chaotic and often unpredictable employment with her practice as an artist—that thing that is her life’s purpose and gives her a voice; that thing she would describe herself as first and foremost before “Iranian” or “undocumented.”

As an undocumented artist, Javani isn’t eligible for most grants, fellowships, or residencies, which are crucial sources of financial and professional support for most artists. A social security number is required on most applications, and she doesn’t have one. As an undocumented person she is in limbo, but she was also in limbo as an artist.

“I went though different phases mentally and emotionally,” she says. “I was sick. A big thing for me was figuring out how to see myself in this system and as an artist in this system.”