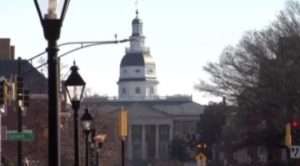 SALISBURY, Md. – Another round of debate is stirring in Annapolis over immigration. House Democrats want to stop law enforcement from asking the citizenship question.

But critics, including a handful of Maryland sheriffs, say it’s a public safety risk. Meanwhile, supporters say its a way to keep those innocent from being unfairly targeted.

Wicomico County Sheriff Mike Lewis argues drugs and crime are sweeping the Eastern Shore. He says questioning detainees on their status is crucial to getting the job done.

“We still have to ask everyone that question like we currently do. Why should they get special exemptions?” Lewis said.

But Lower Shore Progressive Caucus Communications Co-Chair Seamus Benn says the crime to immigrant ratio is small – targeting them he says is unfair and costly.

Benn adds immigrants may help more than harm – a vital source to the economy and filling unwanted jobs.

But Lewis says the motive is clear: stop the bill to help stop crime in Maryland.

If passed, the bill would still honor the use of warrants. That means, with a judge’s permission, law enforcement can still inquire about a person’s immigration status.