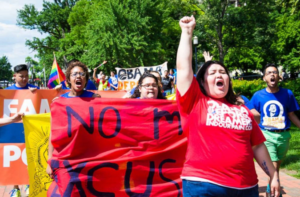 In 2012, the Obama administration introduced the Deferred Action for Childhood Arrivals (DACA) program, protecting all eligible immigrants who came to the U.S. as children from deportation.

“DACA gave me hope,” program recipient Eddie Ramirez told ABC News. “And the biggest thing [DACA] gave me was a Social Security number with employment authorization, which allowed me to work to make money to pay for my schooling.”

Ramirez was born in Jalisco, Mexico, and arrived in the U.S in 1994 at just 1 and a half years old. Ten years ago, in 2012, he received DACA status, ultimately enabling him to pursue his aspirations of becoming a dentist.

DACA students such as Ramirez are ineligible for federal aid, certain scholarships and internships. Limitations placed on DACA recipients drive various corporations and institutions to deny qualified individuals educational and employment opportunities due to their status.

“Not all institutions are friendly toward DACA,” Ramirez said.

During his last year of dental school, the 2017 rescission of DACA went into effect, threatening Ramirez’s citizenship status.

Ramirez is now a practicing dentist in Hillsboro, Oregon, but the future of his reality, and the life he built for himself, hangs in the balance as legislators delay policy reform that impacts his stability.

DACA has promised security to over 835,000 recipients, according to the U.S. Citizenship and Immigration Services.

Over the past 10 years, DACA has faced many legislative challenges. Congress’ latest response to the demands of DACA recipients was U.S. District Court Judge Andrew Hanen’s ruling last July outlawing the DACA program and closing the door on all new applicants. The Department of Justice’s appeal to that decision now makes its way to the 5th Circuit Court of Appeals. Meanwhile, immigration reform is stalled in the Senate.