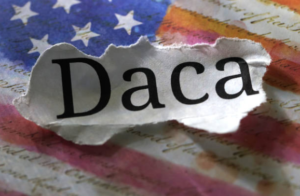 DALLAS — Juan Carlos Cerda was 7 years old when his mother brought him to Texas from Mexico. He grew up in the Dallas-Fort Worth area, graduated from Grand Prairie High School and won a private scholarship to Yale University, where he majored in history.

He came back home with Teach for America, and now he’s working for a business advocacy group, trying to persuade Texas companies to get behind immigration reform. Most employers assume he’s a legal resident, but he’s not.

Cerda, 26, is a so-called Dreamer, an undocumented immigrant in the Deferred Action for Childhood Arrivals program. That protects him from deportation, but only for the moment.

President Donald Trump ended DACA in 2017, although it’s been kept alive by successful court challenges. Next fall, the U.S. Supreme Court is expected to hear oral arguments in the case, and Texas is suing to end the program.

When Cerda meets with executives, he seeks common ground. Usually, they agree on border security, pathways to citizenship and a better guest worker program. Those conversations often lead to questions about his legal status.

“I’m upfront that immigration affects me, that it’s something I want to solve,” Cerda said. “I tell ’em: ‘I want to help you and, at the same time, I want you to help me.’”

An estimated 1.7 million of 11 million undocumented immigrants are eligible for DACA. That includes over 92,000 in Dallas-Fort Worth, according to a new study by New American Economy, a bipartisan advocacy group.

New applicants are not being accepted, even while the number of young unauthorized immigrants continues to grow. In 2016, an estimated 17,000 undocumented graduated from Texas high schools, second only to California.

Texas accounted for almost 17% of the nationwide total, and many of the nearly 100,000 students graduating annually will be ineligible for DACA.

Without such protections, their opportunities and work prospects are severely limited, according to research from the Migration Policy Institute.