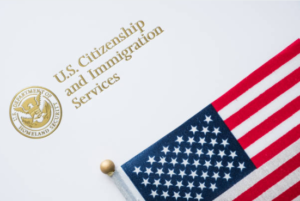 WASHINGTON (AP) — Lady Liberty, constructed in this case of paper-mâché, stands about 7-feet-tall or so in the corner of the office of Ken Cuccinelli, the acting director of U.S. Citizenship and Immigration Services. It overlooks Massachusetts Avenue from floor-to-ceiling windows.

It wasn’t a gift. It was meant to shame him.

Protesters left it outside the agency’s headquarters last month after Cuccinelli reinterpreted the inscription at the Statue of Liberty’s base to align it with policy changes aimed at restricting legal immigration.

Cuccinelli brought it upstairs, took a selfie, and tweeted it.

Like his boss, Cuccinelli has a knack for Twitter trolling. He’s also experienced at talking-head television — another skill that pays dividends with President Donald Trump. And he’s now emerging as the public face of the president’s hard-line immigration policies.

“The most important thing is that communication was part of the charge I got from the president,” he said in an interview with The Associated Press.

“So, we just charge ahead. It’s probably the top policy of interest to the American people and it’s not going to change any time soon,” he said.

The Department of Homeland Security under Trump is making massive changes to U.S. immigration policy. It is denying asylum claims by rendering ineligible anyone who came to the U.S.-Mexico border through a third country, tightening immigration benefits, and moving toward a merit-based system. The changes are thrilling Trump’s base and enraging opponents who say the U.S. is abandoning its humanitarian mission.

Cuccinelli took over USCIS, a part of Homeland Security, a few months ago, following a White House-orchestrated staff shake up at the department that also felled then-Secretary Kirstjen Nielsen. He replaced L. Francis Cissna, who changed the motto of USCIS to delete “nation of immigrants.”

By Colleen Long for US NEWS
Read Full Article HERE