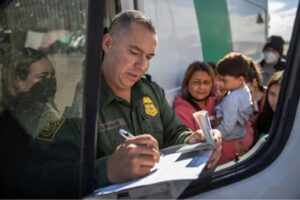 U.S. immigration courts have hit a historic backlog jam not seen in decades, sparking years-long delays for immigrants seeking asylum, according to a new report.

Pending cases at the end of December reached 1.6 million — the largest ever in the court’s four-decade history, according to the report released Tuesday by the Transactional Records Access Clearinghouse, a research group in New York that tracks U.S. immigration cases. Wait times for an asylum claim hearing are averaging 58 months — or just under 5 years.

The mounting backlog of cases – up from 1.3 million at the end of 2020 – creates another immigration challenge for President Joe Biden administration, which has struggled to reverse many of the immigration policies of former President Donald Trump.

“These findings suggest that the immigration courts are entering a worrying new era of even more crushing caseloads — all the more concerning since no attempt at a solution has yet been able to reverse the avalanche of cases that immigration judges now face,” the report said.

The number of backlog cases continues to soar even as officials have continued hiring immigration judges. Today, nearly 600 immigration judges across the nation face the oversized backlog. Working without juries, the judges often have the final say in who gets to stay in the United States and who should be deported back to their home country.

Asylum-seekers waiting years for their cases to be heard have usually been allowed in the country to await their hearings or have been returned to Mexico under policies started under Trump, such as Title 42, which expels migrants to prevent the spread of the coronavirus, or Remain in Mexico, which returns migrants to Mexico to await their hearings. Migrants held in detention are often processed much quicker through deportation hearings.

Though the COVID-19 pandemic shuttered courtrooms and contributed to the logjam, the most alarming cause is the rate by which the Homeland Security Department, which oversees immigration enforcement, is adding new cases to the pile, according to the report.