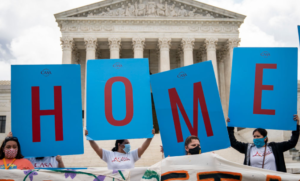 WASHINGTON — Eighteen months into the Biden administration, immigration reform has stalled despite campaign promises to reform the system, with the most recent movement on immigration policy doled out by the U.S. Supreme Court and in lower federal courts.

The Supreme Court ruled in favor of the Biden administration in a 5-4 decision on June 30 that the U.S. Department of Homeland Security did not violate federal immigration law when it moved to end the Trump administration’s “Remain in Mexico” policy, known as the Migrant Protection Protocols. It was a rare win for President Joe Biden amid a string of defeats at the end of the court’s term, including on abortion and climate change.

DHS Secretary Alejandro Mayorkas said during an interview with ABC News on Sunday that the agency is planning to end the Trump-era program that forced migrants seeking asylum to remain in Mexico while their cases were being processed through the U.S. immigration court system. But he said it will take time.

“We need to wait until the Supreme Court’s decision is actually communicated to the lower court, to the federal District Court and the Northern District of Texas, and, once that occurs, the District Court should lift its injunction that is preventing us from ending the program,” Mayorkas said.

There are about 30,000 pending MPP cases, according to tracking by Syracuse University.

Sen. Marco Rubio, a Florida Republican, criticized the Biden administration for moving to end the “Remain in Mexico” policy.

“This decision will send yet another signal to the trafficking networks and cartels that America’s border is wide open,” Rubio said in a statement. “President Biden’s reckless rhetoric and actions are encouraging illegal immigration and hurting our country.”

But Sen. Ben Ray Luján, a New Mexico Democrat, said in a statement that the end of the program “is the first step toward remedying years of humanitarian injustice.”