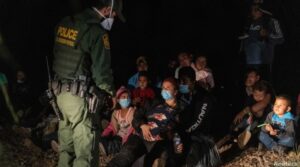 WASHINGTON – While the Biden administration focuses on the Afghanistan evacuation crisis, serious problems fester at the U.S.-Mexico border with increasing numbers of unaccompanied children and two important court rulings complicating the administration’s efforts to implement its immigration policies.

The most recent border numbers show that in July authorities encountered an “unprecedented number of migrants” at the southern border. There were about 212,672 encounters, among them 154,288 who were first-time crossers. The data included nearly 19,000 unaccompanied children — an increase of 24% over June.

Most migrants detained at the border are expelled under Title 42 — a guideline put in place during the Trump administration that gives border officials authority to expel migrants who illegally crossed into the country during the coronavirus pandemic.

Former President Donald Trump’s White House announced the directive in 2019, which gave border patrol agents power to send non-Mexican asylum-seekers to Mexico, where they had to wait for their asylum cases to be reviewed and processed by U.S. immigration courts, rather than allowing them to stay in the U.S.

Human rights activists said an estimated 68,000 migrants were sent back to Mexico under the policy and were often assaulted, kidnapped and extorted. Fewer than 2% won their cases in U.S. immigration courts.

The Biden administration deemed the directive excessively harsh and ended the program earlier this year. But Texas and Missouri sued the government in April arguing that ending MPP led to a significant increase in migrants at the southern border that added to the states’ costs of dealing with migrants.