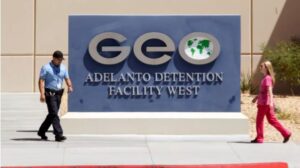 A federal appeals court decided Tuesday that California must exempt federal immigration detention centers from its ban on for-profit prisons.

In a 2-1 ruling, a panel of the U.S. 9th Circuit Court of Appeals said a California law aimed at phasing out privately run prisons may not include immigration detention centers in the state.

California countered that it had the legal right to safeguard the health and safety of detainees in the state, but the 9th Circuit said the law discriminated against the federal government. The court said the U.S. Immigration and Customs Enforcement (ICE) has only privately run detention centers in California, where immigrants are held until they are deported or released. Activists disputed that, noting the ban would still leave in place one holding facility.

California Atty. Gen. Rob Bonta, who wrote the law as an assemblyman, indicated in a statement that the state was likely to appeal.

“We will continue the fight to ensure the dignities and rights of everyone in California are protected,” he said. “As a Filipino American who was brought to this country as an infant, this fight is personal to me. While the road ahead may feel a little longer today, our work continues, and we will keep pushing forward.”

The Legislature passed the measure and Gov. Gavin Newsom signed it into law in 2019 based on reports of substandard conditions, inadequate medical care, sexual assaults and deaths in for-profit prisons. Other states have passed similar measures, including Illinois, Nevada, New York and Washington.