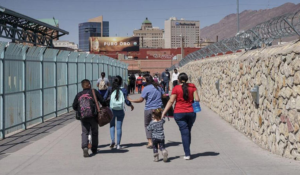 The liberal media has characterized the Supreme Court’s decision allowing President Biden to terminate the “Remain in Mexico” policy as a win for the president.

Not so fast. In reality, the court has handed the struggling president yet another political hot potato. Already there are a record number of people traveling north to cross into the U.S. illegally; this decision will likely increase the flow, causing headaches for an overwhelmed border patrol, and for the White House.

A recent Economist poll shows Biden’s approval on immigration at 32 percent; chaos at the border is not popular.

Biden’s approach so far has been to ignore the problem, despite pleas from border states, which absorb the brunt of the influx. Now, however, after the horrific deaths of 53 migrants left to die inside a scorching truck, Democrats and their allies in the liberal media are finally paying attention. It’s about time.

Senate Majority Whip Dick Durbin (D-Ill.) has called the slaughter a “Uvalde moment,” likening the impact of those deaths to the galvanizing murders of 19 school children last month in Uvalde, Texas. That terrible event led to the first gun reform laws being passed in decades.

Similarly inspired, Durbin and Sen. Thom Tillis (R-N.C.) are reportedly in talks aimed at reaching a broad compromise on immigration.

This could throw Biden a lifeline. Were the president to encourage Democrats in Congress to propose sensible immigration reforms, he might actually improve his standing.

The odds are long.

Over many years, repeated efforts to agree on common sense immigration rules that might stem the flow of people coming across our border illegally – now at over 200,000 per month – have flopped. Democrats welcome the flood of mostly Hispanic people entering our country, convinced that they will ultimately become voters for their party. That was not always the case.