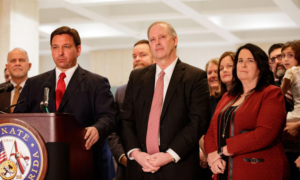 Whether she meant to or not, Lois Frankel neatly summed up the nation’s immigration situation in one terse sentence when Gov. Ron DeSantis sent two planeloads of asylum seekers to Martha’s Vineyard.

The Palm Beach County congresswoman is usually one of the most loud and loquacious of liberal Democrats, going back to her days in the Florida House in the 1980s. But while deep thinkers from the White House to the panelists on “The View” ranted and raged about DeSantis’ decision to fly 50 immigrants to Martha’s Vineyard, Frankel just put out a little statement that said, in its entirety, “What we need is real, bipartisan immigration reform — not inhumane political stunts.”

In a dozen words, Frankel made the perfect response, factually and politically. The first part of her comment cited the very real and critically important nature of a border emergency, while the second part embraced the bitter response all Democrats have to take whenever DeSantis does anything.

Flying immigrants to Massachusetts, and boasting that he’ll happily send more, was a political stunt. It was also politically smart, gaining DeSantis more nationwide news attention than anything he’s done since he stripped self-governing status from Walt Disney World in retaliation for the company’s criticism of his law forbidding discussion of sexual topics in public schools.

State and national leaders have been urging bipartisan immigration reform for at least the last 40 years. They thought bipartisanship was possible in 1986 with the Simpson-Mazzoli bill, when Ronald Reagan took a position that would horrify today’s Republican Party.

And 30 years later, when Donald Trump announced his presidential candidacy by calling illegal immigrants rapists, drug smugglers — and, OK, some good people — the country’s southwest border had become a sure winner for the Republican Party. So, with Vice President Kamala Harris insisting that the border is secure, it was an invitation for Republican governors to send a few thousand asylum seekers to her home, along with such “sanctuaries” as Massachusetts, New York and Washington D.C.