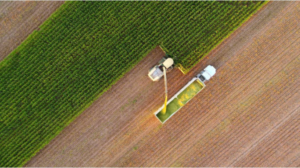 In years past, that job would have been done by 30 people. But today Fuentes, 56, sits alone atop a tractor with a specialized mechanical attachment that handles the entire operation.

“This is the future,” he says.

The future, in fact, has many farmers nervous. The company Fuentes works for provides labor to Ocean Mist Farms, which has begun turning to automation because farm workers are both in short supply and increasingly costly.

“But there’s the minimum wage, the cost,” he says. “The bottom line is, we have to compete.”

California farmers, anchors of a $50 billion industry that represents 13 percent of the nation’s agricultural value and a critical source of its produce and milk, are facing an unprecedented squeeze on their livelihoods that could have repercussions in households from coast to coast.

Beyond a decade-in-the-making labor shortage, spurred in part by a lack of replacements for an aging work force, California’s newly enacted overtime pay law and the Trump administration’s tense rhetoric over immigration have ratcheted up concern among both farmers and those they rely on to work the land.

Farm workers who once crossed the Mexican border routinely for seasonal work in el norte now express deep fears about making the trip, effectively cutting off the supply of labor south of the border.

Meanwhile farmers, increasingly faced with upwards of a 20 percent shortfall in field staffing, often are forced to leave lucrative crops to die on the vine or sell high-priced goods such as strawberries to jam manufacturers at a reduced rate.

Some farms, such as Ocean Mist, are hoping to turn the financial tide by relying on robots and mechanization. Others have elected to grapple with cumbersome H-2A visa program paperwork to temporarily import an international labor force.