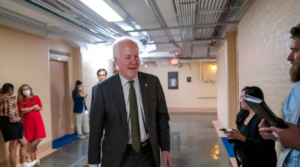 Sen. John Cornyn’s, R-Texas, office on Wednesday denied that a bipartisan immigration bill is in the works after comments he made on the Senate floor that his staff say were a joke, but that sparked uproar from conservatives.

Cornyn, who frequently attempts to find bipartisan paths for legislation on a range of issues that includes immigration, was on the Senate floor Tuesday evening as the chamber advanced bipartisan gun legislation that he had helped shepherd.

Cornyn’s reported comments drew swift backlash from the right, many of whom were already angered by his support for the gun legislation which advanced 64-34 in the split chamber.

Cornyn has previously backed bipartisan immigration efforts, including a border security bill, which he introduced with Sen. Sinema to combat the migrant crisis at the southern border. He has also backed a pathway to citizenship for illegal immigrants who came to the country as children and who were eligible for the Deferred Action for Childhood Arrivals (DACA) program.

Ohio Senate candidate J.D. Vance said on Fox News’ “Ingraham Angle” that it would be “catastrophic” for the Republican Party to “advance amnesty.”

“The worst thing that we can do as a party right now in the midst of a historic immigration crisis is to advance amnesty. And if we do it, we will get crushed and we will deserve it.”

House Republican Leader Kevin McCarthy, meanwhile, appeared to distance himself from any such efforts: “Amnesty is a non starter with me and won’t be taken up by a House Republican majority,” he told Axios.

But a spokesperson for Cornyn denied that an immigration bill was on the table.