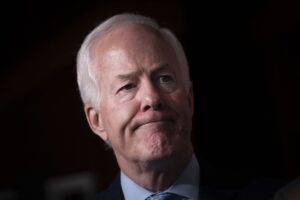 How do we know Very Serious Texas Republican Sen. John Cornyn’s proposed relief for some undocumented young immigrants is actually just a bad faith effort? Well, it’s John Cornyn, first of all. Secondly, there appears to be no actual legislation yet, just some rough idea of a bill that he outlined in a letter earlier this month to Democratic Illinois Sen. Dick Durbin.

Cornyn’s proposal apparently provides relief for only immigrants currently enrolled in the Deferred Action for Childhood Arrivals (DACA) program. That shuts out large numbers eligible under the Dream Act and other legislation. But there’s more! While Cornyn mentions “permanent legal status” in his letter, he doesn’t use the word “citizenship.” That’s a crucial distinction, and we’d like to know more, but there’s no bill! This is not a serious offer, but Durbin is a decent enough guy that he responded. Read on.

“While your legislative proposal would protect these ‘currently enrolled and active’ DACA recipients, it would exclude hundreds of thousands of Dreamers who are eligible for DACA but were blocked from enrolling in the program by the previous administration,” Durbin responded. While he notes there’s currently over 616,000 active DACA beneficiaries in the U.S., “the Migration Policy Institute estimates that more than 1.3 million young people were immediately eligible for DACA in 2020.”

“In contrast to your proposed legislation, the bipartisan House-passed American Dream and Promise Act and the Senate version of the Dream Act would provide a pathway to citizenship to all Dreamers who are eligible for the DACA, as well as Dreamers who are excluded from DACA,” Durbin continued.